In 1980 there was a generous gift from the estate of James (Jim) Dilley. Jim was a bookstore owner from Laguna Beach who had traveled extensively in Europe and had attended Harvard Divinity School. He was also the town drunk.

Legend has it that every time Jim’s dog Bebo would see a police car pull up to the curb, he would hop right in. You see, Bebo had become accustomed to regular trips to the town drunk tank. Jim would later get sober at the Canyon Club around 1963. He was very active at the Club and according to sources, became a chief source of financial support for years when the Club couldn’t pay it’s own way. He was 16 or 17 years sober (best the old timers can remember) when he died, bequeathing his bookstore to the Canyon Club in a final gesture of gratitude for all he had found there.

Jim’s gift to the Canyon Club of Dilley’s Bookstore (now Sherwood Gallery) was later used by the Club?s Board of Trustees to purchase a piece of commercial property in the canyon. 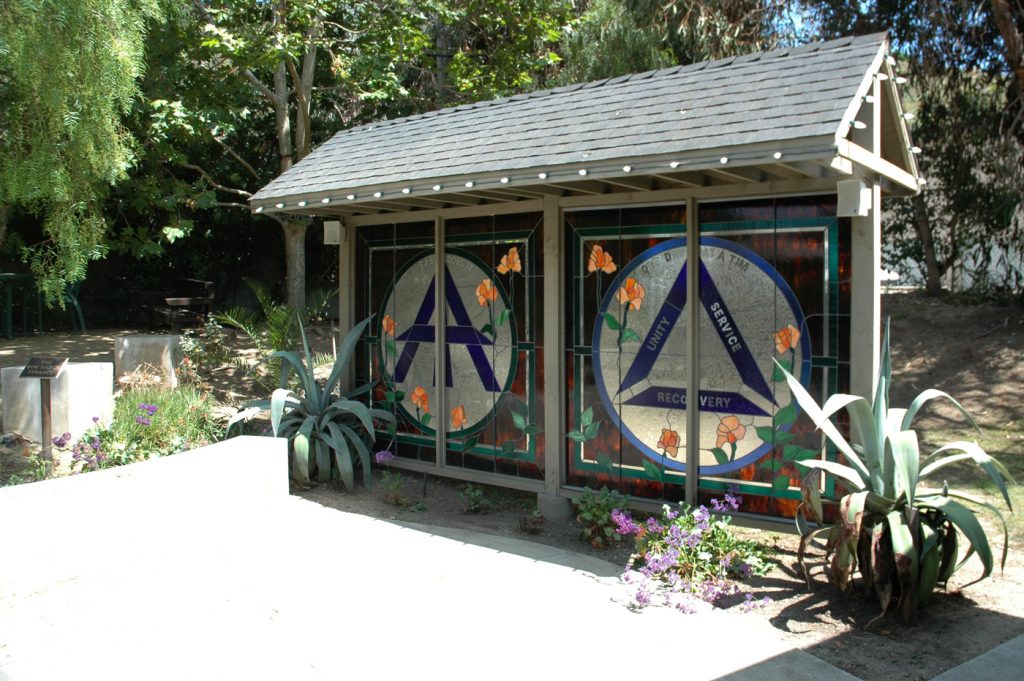 The Board was feeling the pinch from the membership to find a new Club. It had been 13 years since Jim’s donation. The commercial property that the Club already owned was deemed unsuitable for redevelopment as a meeting space. So a land exchange was brokered from that property to the current property site ‘20456 Laguna Canyon Road’ a 1.4 acre plot of land.

The building of the Club was underway. A competition for development plans opened to architects who did non-residential buildings. After reviewing proposals from three different firms, Peyo & Associates was selected. The architectural firm had done many previous non-residential projects. Not only was their price the most competitive, it took into account the spiritual intent of the building.

Some of the unique design features were:

The basic structure had two wings which were angled to embrace or receive all who entered.

The parking lot was ‘green’ because it was gravel where water would drain into the ground and not just run off.

Trees and landscape were incorporated to preserve the park-like appearance and decrease the noise from Laguna Canyon Road.

The winning bid for the Club’s construction came from Young Construction Co. Both the architect and construction firms gave us very large discounts. The bid for construction was $333,033.33. (I think three was his lucky number.)

In regard to day-to-day construction at the site, the architect turned up everyday to supervise quality of materials as well as his crew. One day I spoke with him. “You know we cannot pay you for daily supervision. You are putting in an extremely large amount of time for which we are unable to compensate.”

He responded with a great story… “When I was in high school I had just won a scholarship to college and went out to celebrate,” he said. “Unfortunately I got drunk and arrested by the police that night. Standing before the judge, I explained that I was a first generation Bulgarian and that no one from my country had ever been accepted into Berkeley. I had a full scholarship and if the DUI went on my record, I would loose the scholarship.” Unbelievably, the judge said, “I’m going to expunge your record this time, but sometime in the future you must make a contribution to help AA. So you see Herman, this is my payback.”

After the project started we noted that we were running short of building funds due to the many changes we were adding. We conducted fundraising activities, but were still short. Head of the fundraising committee was Muriel Zink, so we put the matter in her hands. She asked one of our angels for a contribution. He said, “How much do you need?” She responded with $30 thousand. He wrote a check then and there.
The time frame from the appointment of the new Trustees to completion of the building was from April 1993 to November 1993. These are just a few of the miracles that helped put this new building into place.